Many of you have seemed to have formed the wrong opinion of my beautiful and talented wife Marcy, the mother of our..the two of us…son, Josh, named after his paternal grandfather who was, interestingly enough named Kevin but there was no way I was going to name any son of mine Kevin. I’m really digressing to the point of irritating and that’s on me. What I am trying to say is that there is no woman on earth that I raise higher or love more than my wife Marcy, the mother of my son Josh, which I have already pointed out. I’m not very good at writing things. I believe in the spoken word. The conversation. Two men (or women or a mixture of such or the same) bellying up to a bar and getting it said. You know? That’s why this writing stuff, as far as I am concerned, is strictly from hunger. However, since I requested the space and time from the Hendrie people, let me use it wisely. What I want to say, pursuant to the Thursday June 23, 2022 show, is that my wife is not some grunting, slobbering thing, leaning over a bloodied and ragged piece of meat, devouring it like some walker from that Night Of The Living Dead! She was enthusiastically dining on the Porter-Ted, 36 ounces of the best meat you’ve ever shoved toward the back of your throat. Sure she drooled a bit and made noises like she was eating a member of the Alexandria community..,.I better stop. That was an unfortunate reference to The Walking Dead. I’m messing this up. Marcy is a good and pure woman who has supported me and our son through every one of life’s challenges. She scared me when she went after that Porter-Ted like she was just another leg-dragger in a herd of skin jobs. I wish I could write this better. Marcy is a good woman. But she likes our steak. Maybe too much. Maybe to the point of it being unnatural. But she likes it. And she loves me. And, yes, our son Josh (I forgot him, not really but maybe) I don’t write too good but by God I run one hell of a restaurant. Ted’s……………..of Beverly Hills. Come on in for a Ted, today. 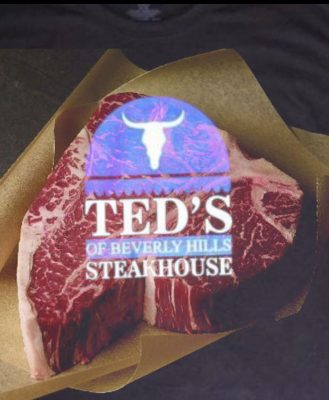