Phil talks with Larry Grover, from Conservatives of Kern County, about John Schnatter of Papa Johns. Larry doesn’t get it. He called two elderly white people a couple of “n*****s” for walking too slow in a crosswalk.Vernon Dozier drops $5000 on Belgium in the World Cup.

The BSP Classic Show is from April 2003. Featuring Jay Santos on patrol telling people to take down yellow ribbons, because it angers Arabs who are being defeated by American forces in Iraq. 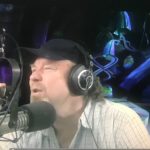