Sean Goldboy hosts the Kevin Coneal Real Estate Foreclosure Hour, and in the midst of Kevin convulsing over the word “stupid” we learn a few other disturbing things about him. Hint: he admires Jim Jones. Originally aired on January 8th, 2015.

The BSP Classic Hour is from March, 2006. It’s an All Request Hour with… ‘The Cobra’s Out’ ‘Free From Housefires’ ‘Vernon: Gas Station Owner’ ‘Burning Bugs’ and ‘David Hall vs. Silvia’. 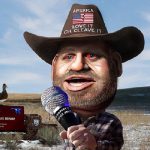