Mavis Leonard commented on the fact that the name “Mavis” is popular again for baby girls. Mavis doesn’t like it, says the name Mavis is “hellbound” and all it does is put you on a “fast track to meet the horned one.”

Chris Norton weighed in on Kris Humphries being sued by a Beverly Hills mens clothing store. “I don’t think this clothing store knows that this guy was able to ass’ess the sess’ of a pretty sessy woman… thas’ ess’elent!”

Then Phil and the crew talk with Frank Grey about a book Phil’s reading; a narrative about the Revolutionary War by a young private named Joseph Plumb Martin. Frank, with his gender confusion, wanted to know “her opinion of General Washington. What did she think of her?”

Some other messed up stuff.. 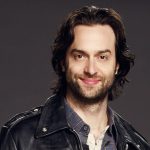