Ted Bell from Ted’s of Beverly Hills is in studio to talk about a disastrous Easter promotion. Chris Norton from Throb City Productions says there’s a “bot purge” happening on Twitter.

The BSP Classic Hour is from April 2005. Margaret Grey talks about her son Jason Jay Delmonico, a boy she and Frank adopted, and how proud she is because when adopt a kid, according to Margaret, its like picking a perfectly good bologna sandwich out of a garbage pail 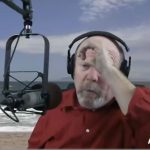