Phil has relented and given the panel another day off. So it’s Phil going solo and talking about Santa Monica traffic, Sean Spicer, Trump and the weak ass press.

The BSP Classic Show from May 2003 features Vernon Dozier, who says female athletes like golfer Annika Sorenstam should not be competing with men because if they lose it will set women’s rights back decades. 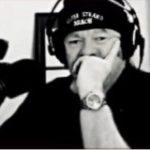