It’s “Bob Green Today” as the CEO of Frazier Foods does more Saturday Cinema damage control and takes calls from Marilyn Donnelly, Bobbie Dooley and Roy Biskey telling him to let it go.

The BSP Classic Show is from February 2004. Steve Bosell is suing CBS because he hosted a lavish Superbowl party at his house with the Lingerie Bowl at halftime, but his guests left to see someone’s Tivo replay when they heard about Janet Jackson. Mavis Leonard says that society tolerates the Janet Jackson incident only because it’s a white man ripping off a black woman’s clothes. 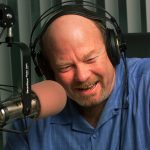