The BSP Classic Hour is from December 22, 2000. Chris Norton gives a “not non-hanky” co-worker a gift basket of vibrators for Christmas and she’s suing.” 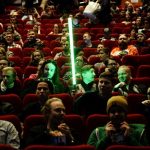