It’s Tom Cattan and Jay Santos, in this encore from December 5, 2016. They were at Phil’s Improv show. Jay had a problem getting people to take him seriously. Tom was pitching his new “handful of grain for a handful of brain…” and Vernon Dozier has had it with Phil’s “world football” talk.

The BSP Classic Show is from October 2004. Vernon Dozier helped black students change their votes to Kerry during a mock election, because their parents’ expectations are for blacks to vote Democrat. Callers say he’s not helping students think for themselves and that he’s promoting reverse racism. 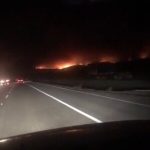