This is a classic. Phil and the panel discuss the “agony of defeat” ski jump fall from the open to the old Wide World of Sports show before Jeff Dowdder demonstrates ski jumping at Bare Mountain. That’s right, B-a-r-e. It’s Larry Grover having a real hard time with the Reba McEntire KFC commercials. Larry’s mother meanwhile admits to a lesbian affair. Larry’s humiliated. An encore from February 12, 2018.

The BSP Classic Show is from September 2004. Jay Santos is on patrol to harass motorists. Phil talks dating tips with a man currently serving a life sentence for murder. Flashback with pharmaceutical salesman Chris Norton. The “Natural Home Building with Brian Wersham” show and Wersham’s abject hatred of “selfish” trees. Bobbie and Steve Dooley report from the Republican National Convention. Jeff Wagahusky, a man who literally has a “tongue so long that it’s coming out of his head” gives an unintelligible review of the film “The Passion of The Christ.” The Skippy and Frank Show” is live in NYC for the Republican convention. 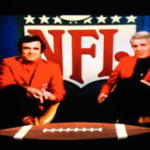