Margaret with the news flash that Mancow is coming to LA….David G.Hall says “get the whore off the air….”..Phil talks about Stan and Haney on WRXK…Margaret fights her way off of hold…Herb Sewell asks for pen pals for psychiatric inmate Walter Bellhaven….Dr Jim Sadler plays a PETA tape of a KFC employee having sex with a chicken…Farmer calls to talk about the great beak he got from a Rhode Island hen….Professor Husband Ginther with Chicken Jokes Containing Sexual Innuendo….C93, Pierre, South Dakota program director Darren Browne is forced to his knees and shot execution style by Bud…..

Ted Bell tries to impress a beautiful African-American woman at a party by telling her he flies chartered jets every time he travels…..Ted says his employee Craig Lincoln is no big thing for flying first class….African American female caller reacts angrily, saying Ted simply wants a “black sex slave…”…Ted expresses opinion white men are naturally attracted to black woman but that the idea of a white woman being attracted to a black man makes him want to pick up a baseball bat….Ted says the white wives of white men get it and usually won’t interfere with their husbands affair if its with black woman….

RC Collins of Bradley Military Academy wants to be 101st Airborne but would like the option of not jumping out of a plane into combat if it looks too hairy…..RC talks with a combat veteran who tells him he’d kick him out the door anyway. RC says “that would be murder”……..RC says that coming down in a parachute makes the target for any enemy on the ground quite obvious…He’s shooting up so “what do you think he’s going to hit first?….Phil says taking King of the Hill off of the air is Fox “trying to wring every last penny out of that half-hour “like they have their hands on a KFC chickens throat…”…Phil tells the story of the 101st at Bastogne in WW2….. 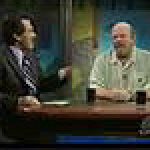