Phil welcomes the winner of Bar Fight 4, Pastor William Rennick to the show. His wife, Clara, tells him to quit ripping off the congregation or she’s leaving him! Dr. William Brown of the William Brown Institute of Tupelo, MS, comments on recent studies that claim chimpanzees in three different parts of the globe have evolved into a primitive Stone Age mentality. Brown’s pissed. Dr. Ron Tarner admits he is the naked man in the viral shark photo. He says he was sleepwalking and awoke “humping” the shark. One of his students took the picture.

The BSP Classic Hour, from October 2005, is a beauty with the famous Don Parsley. He claims he rescued a deaf girl from a burning building. David G. Hall calls in and asks Phil if his material is going to be as bad as this bit for the next 6 weeks while he’s rehearsing and filming “Teachers.” 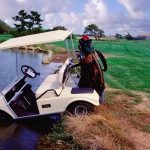